Among all public-key encryption systems, the McEliece cryptosystem has the strongest security track record, and is the system of choice for users who want to minimize security risks. See the design rationale and guide for security reviewers for a more detailed review of McEliece security.

When the McEliece cryptosystem uses a code of dimension k = (0.8+o(1))n as n→∞, the original 1962 Prange information-set-decoding attack costs (5+o(1))t. Here t = (0.2+o(1))n/lg n is the number of errors used in the cryptosystem; lg is logarithm base 2; and o(1) means something that converges to 0 as n→∞. The best non-quantum attacks known today, after many papers studying attacks, also cost (5+o(1))t. A closer look at the o(1) shows small improvements in the attacks, improvements that do not affect the asymptotic security level of the cryptosystem.

The graph shows the advances in asymptotic exponents of non-quantum attacks against "unbroken" lattice-based cryptosystems (red graph), compared to the McEliece cryptosystem (blue graph). The vertical axis is the limit as K→∞ of lg(AttackCost(Y,K))/lg(AttackCost(2020,K)), where AttackCost(Y,K) is the cost of the best attack known in year Y against key size K. The horizontal axis is Y. 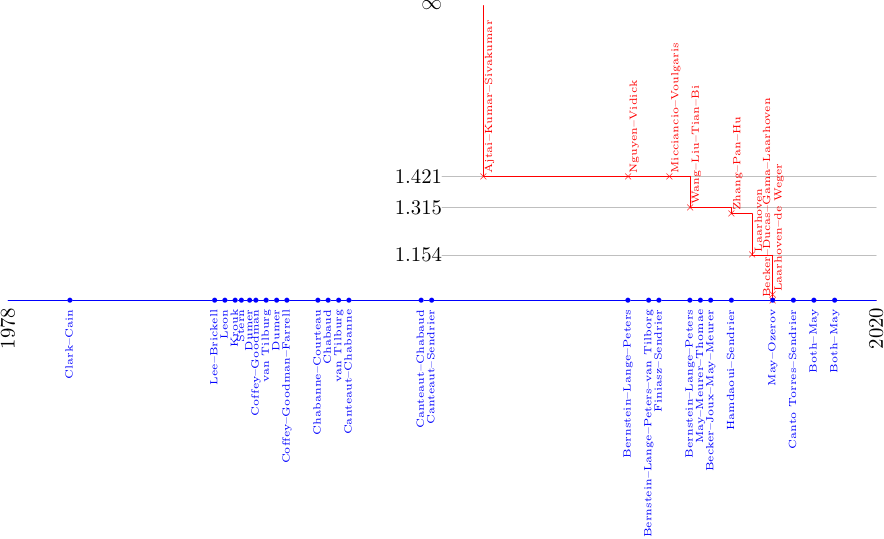 The FrodoKEM lattice proposal is labeled as a modified "instantiation and implementation" of a 2010 paper. The 2010 paper proposed dimension-256 lattices giving 575-byte ciphertexts ("4.6 x 103" bits), and wrote that those parameters "appear to be at least as secure as AES-128". For the same AES-128 security goal, FrodoKEM instead proposes dimension-640 lattices giving 9720-byte ciphertexts.